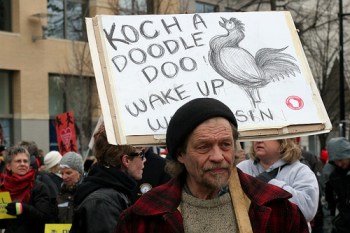 When reading about the current labor fights taking place around the country, it’s important to remember that this is anything but a fair fight.

Middle class workers with jobs, families to take care of, and bills to pay are up against multi-billion dollar corporations and their extremely wealthy owners who can buy entire PR firms to do the dirty work.

Koch industries, the second largets privately owned company in the country, is one of the largest offenders. It’s owners, the Koch Brothers, have roughly $20 billion each – and aren’t afraid to spend hundreds of millions to get their way.

The situation in Wisconsin, where the fight for labor first gained national attention, is in large part the result of the Koch brothers influence over Governor Walker and their support in getting him elected. Despite being based in Kansas, they were the second largest contributor to Governor Walker’s campaign, giving him $43,000.

The Koch funded group “Americans for Prosperity” makes their politics clear. They want to ‘take the unions out at the knees‘ so that working families can no longer afford to campaign.

Not content with union-busting, another one of the Koch Brother’s frontmen may have deceived government officials in order to take $2.7 million dollars in tax-payer money for a NJ governor’s race.

This is anything but a fair fight.

The Koch brothers are now getting ready for the 2012 elections, pledging to raise $88 million to defeat Obama.

Luckily, people aren’t having it. Even money can’t buy true grassroots support. It’s not going to be an easy, but the middle class is something worth fighting for.