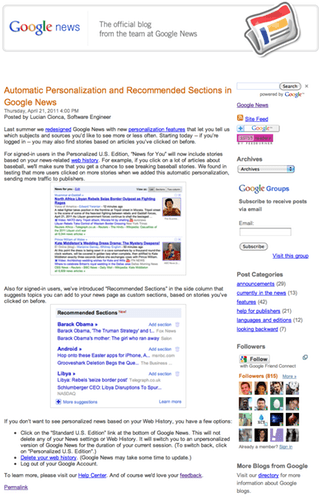 It’s one thing to optimize ads. It’s entirely different when Google starts to ‘optimize’ the news.

Google has rolled out a new ‘personalization’ engine for Google News. An automatic service that will optimize your news feed, showing you stories it thinks you’ll ‘like’ more than others. Stories you’re more likely to click on, as they put it.

I’m normally not the suspicious type, but this has ‘monetization strategy’ written all over it.

Lets take a few steps back, maybe that isn’t so bad? Google is a business. And there’s a lot of useless news out there. Why show me football when I’m a baseball kind of guy? Or country if I like jazz? With sports and entertainment this makes sense.

But the benefit quickly disappears when you throw world affairs, health, science, policy and politics into the mix. In these areas, what I ‘like’ isn’t always the most important consideration. Perspective is – exactly what’s lost with this new system.

The number of ‘clicks’ I log is a flawed metric. It doesn’t take into account the impact a meaningful headline can make – sometimes they’re too tragic to read. The 1,500th soldier killed in Afghanistan or the 3rd story about protesters being killed in Syria might not be big ‘click-converters’, but both headlines would follow me the rest of the day.

Google might give us what we want to see, but hide what we need to see.

I do give Google credit for providing detailed opt-out instructions on their blog post. They even have a place on their forums where you can give feedback. But this is the new default and that’s a problem. Anybody who doesn’t read the Google Blog will have little idea anything is different. They won’t realize the news they’re seeing isn’t the same others see.

And that’s the crux of the issue, people won’t know information is being filtered out of their news stream. Google News is seen as an aggregate news source – taking the most important stories and putting them in front of you. As of last Thursday, that’s no longer the case. That’s the new hidden cost of Google News. Without even realizing anything has changed, we’ll have lost perspective.